What does American art celebrate? This nation was built by radical and revolutionary men and women who believed in life, liberty and the pursuit of happiness. This congregation of revolutionary people would then form a nation based on those beliefs. This nation would join all of these radical people together and instill in them a sense of patriotism towards this new found union. During this time of freedom fighting there were people who went past the call of duty and they believed that freedom was something worth risking life and limb. Throughout the history of The United States we have celebrated those people who fought for this nation’s freedom as well as those who have used this freedom to achieve great feats. Just as those who united through their fight for freedom, now Americans unite to persevere and honor that freedom. People believe in this country and the ground rules that define what The United States as a country and as individuals will accomplish. This unification called patriotism is what inspires every American piece of work. American art celebrates patriotism, because patriotism highlights the best part of being American, that you have freedom and are in a community with others who cherish their freedom as well. 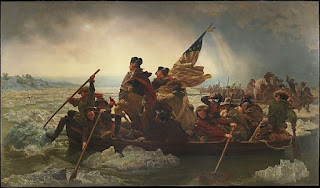 Patriotism is most strongly manifested in the leaders and forerunners of this country, such as George Washington. This painting tells a scene in which George Washington gathers his troops together and does the unthinkable, attack at night and on Christmas. This plan ended up working even though many were hesitant at first to go on the river that night, but after people soon knew what Washington was willing to do for freedom and that he is the man capable of leading the new nation. Leutze wanted his piece to unify people and instill a sense of patriotism, and who better to do that than the first president himself George Washington and painted on a night that solidified his character and history.
The Declaration of Independence, 1776, John Turnbull, 1818, Oil on Canvas, 144 x 216in. .
Architect of the Capitol.
https://www.aoc.gov/capitol-hill/historic-rotunda-paintings/declaration-independence 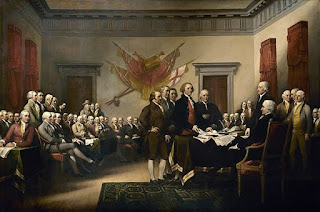 This painting depicts such a serious and vital time in the history of this nation when the Declaration of Independence was drafted before members of Congress. This painting was commissioned in 1817, so Turnbull was able to paint some of these figures from life and the others were drafted from different paintings. Much of the value of this piece comes from the authenticity of the figures appearances. It is such an interesting scene because it depicts the great founders of this nation collaborating together to form a document that would come to be solidified in time. This community and union represented in Turnbull’s The Declaration of Independence, 1776 are the true building blocks of patriotism.
The Midnight Ride of Paul Revere, Grant Wood, 1931, Oil on Masonite, 30 x 40in. 50.117 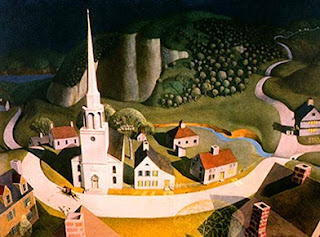 The midnight ride of Paul Revere is a story that most people heard as a bedtime story and will always be cherished for its legend-like like aura. When looking at the piece Wood places outside the setting so that as a viewer we can understand the magnitude of what Paul Revere is accomplishing with this midnight ride. When looking at the details in this piece, you can make out the urgency in the figures posture and faces. This piece celebrates legendary story that has captivated the minds of many Americans, brings us together to celebrate the work done by Paul Revere and the those supporting him.
Writing the Declaration of Independence, 1776, Jean Leon Gerome Ferris, 1921, Oil on Canvas, 30 x 24in.
Virginia Historical Society
http://www.vahistorical.org/collections-and-resources/virginia-history-explorer/writing-declaration-independence-1776 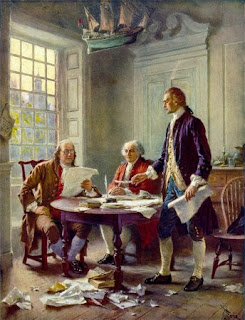 Freedom is a gift most often overlooked if you have it, but to those who live a life of confinement it is truly priceless. The Declaration of Independence is a manuscript that defined this nation, and would set the tone for how this newfound country would govern. All in all, it is a document declaring freedom for the American people. This document and any representation of it has a unique ability to warm the heart of Americans, because we know the price people paid for freedom and we now are called to live in the light of what those freedom fighters did. This patriotic symbol representing the making of our freedom is truly a piece that unites us all.
White House, James Hoban, 1800 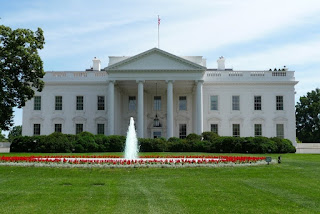 The White House home to the most powerful man in the world surrounded around the next most influential people. The significance of the building cannot be undermined; wars have been started, lives have been changed, and leaders have all been manifested within its walls. The White House entrance has four columns showing a symbol of symmetry and strength. Above the columns is a pediment in a triangle shape showing strength and stability of those in working inside The White House. The White House is a symbol of the national patriotism in all Americans.
George Washington Carver Crossing the Delaware: Page from an American History Textbook, Robert H. Colescott, 1975, Acrylic on Canvas, 84 x 108 in.
Collection of Robert and Lois Orchard, St. Louis, MO.
http://savannahnow.com/accent/2009-02-14/jepson-center-showcases-robert-colescotts-provocative-paintings# 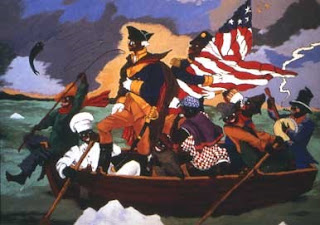 Throughout the history of The United States there have been a number of extraordinary individuals who have used the freedom that comes with being American to accomplish great works and feats. This piece celebrates the works of George Washington Carver who was a great scientist in a time when African Americans were pushed away from the studies. This painting looks oddly familiar, but so different at the same time. G.W. Carver and the original Washington Crossing the Delaware are both celebrating the accomplishments of the two George Washigntons. Their accomplishments are something that everyone can celebrate and Colescott has deemed it worthy.

Posted by covenantarthistory at 6:14 PM